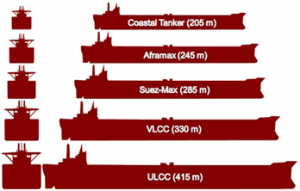 Vessels specialised in the transport of crude oil. Large crude oil tankers can be divided in 4 classes:

ULCC or Ultra Large Crude Carriers are the largest shipping vessels in the world with a size ranging between 320, 000 to 500, 000 DWT. Due to their mammoth size, they need custom built terminals. As a result they serve a limited number of ports with adequate facilities to accommodate them. They are primarily used for very long distance crude oil transportation from the Persian Gulf to Europe, Asia and North America. ULCC are the largest shipping vessels being built in the world with standard dimensions of 415 meters length, 63 meters width and 35 meters draught. 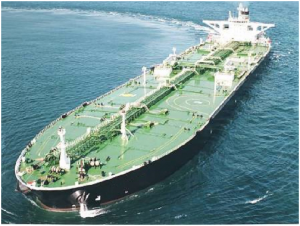 VLCC have a size ranging between 180, 000 to 320, 000 DWT. They are capable of passing through the Suez Canal in Egypt, and as a result are used extensively around the North Sea, Mediterranean and West Africa. VLCC are very large shipping vessels with dimensions of up to 470 m ( 1, 540 ft) in length, beam of up to 60 m ( 200 ft) and draught of up to 20 m ( 66 ft). But the standard dimensions of these ships range between 300 to 330 meters in length, 58 meters breath and 31 meters in depth. They are known for their flexibility in using terminals and can operate in ports with some depth limitations. 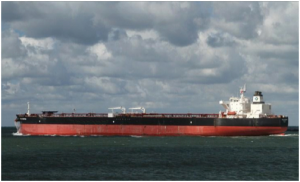 Aframax is a medium-sized crude tanker with a dead weight tonnage ( DWT) ranging between 80,000 and 120, 000. The tanker derives its name from AFRA which stands for Average Freight Rate Assessment. AFRA system was created in 1954 by Shell Oil to standardise contract terms. 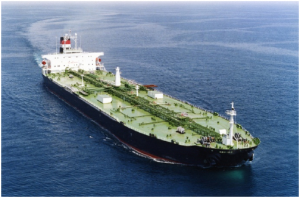 Aframax tankers are extensively used in areas of lower crude oil production such as in Non- OPEC countries which lack large harbors and canals to accommodate VLCC and ULCC class of tankers. Their main areas of operations include South American oil cargo exports to the US Gulf region through the Caribbean, North African exports to Southern Europe through Mediterranean, exports from former Soviet Union Republics to Northern Europe through the Black Sea and the North Sea, and South East Asian exports to the Far East. As Aframax vessels are mainly used in transporting crude oil, they are sometimes called ‘dirty tankers’.

This type of vessel carries the refined products of refineries and petrochemical industry. Such vessels may carry different products simultaneously. There are higher number of tanks/holds available than by the crude oil carriers. Every tank/ hold has its own piping system and its own cargo pump. The cargo tanks are surrounded by ballast tanks such as the crude carriers. Possible cargoes for these type of vessels are: gasoline, kerosene, diesel oil, lubricating oil etc.

This type of vessel has a higher safety grade than a product tanker. The cargo tanks are separated from the outer shell/ double bottom by ballast tanks. Between the cargo tanks, cargo tank, engine room and forepeak there’s a narrow, empty space called cofferdam meant to create a safe division so that in case of leakage the consequences are reduced. A cofferdam is also required in case two cargo tanks are filled with different, incompatible products. In the cofferdam there’ s usually a sounding pipe, a bilge connection and a connection with open air. 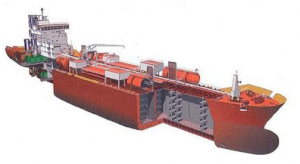 The chemical tankers are categorized in classes subject depending on the protection they offer against pollution: I for the most toxic cargoes, II and III for less dangerous substances, for instance.

The cargoes can be divided in classes of toxicity: A, B, C and D; A is the most toxic and D the least; the degree of toxicity and which ships are allowed to carry such substances is well defined by the IMO. 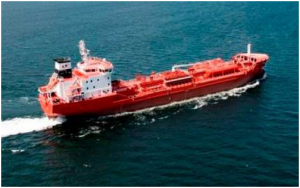 These are the gas carrier vessels. The gas cargo is pressurized or brought under low temperatures so that it becomes liquid, which increases the transported quantity; according to the method used to liquefy the gas, this type of vessel can be divided in 3 categories: 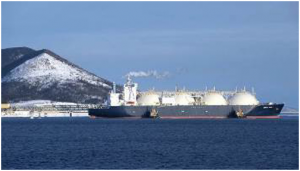 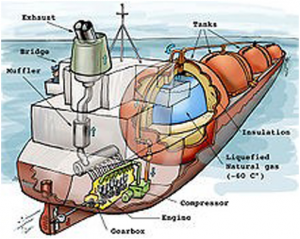